Im so tempted and close to signing up for @SpotifySG premium. Should I should I? Has anyone signed up for the subscription?

I’ve been toying with subscribing to Spotify Premium for the longest time. Afterall, it only costs 9.90 SGD a month. That’s like the cost of two Starbuck lattes.

Free desktop and mobile high quality audio streaming, anytime, anywhere. Subscribing should be a no brainer, right? Strangely enough, the answer is no.

I think it’s because if I do subscribe, it’ll be the first time I’ve ever properly subscribed to anything for myself, and so it’s kinda scary. I’m a little scared by the thought of being hooked on a service that sucks money from me on a monthly basis, no matter how small that amount is.

So, I turned to the Twitterverse for advice, hoping that one of my followers/friends out there would give Spotify Premium a glowing review, thereby giving me an excuse to finally subscribe to the service. What shocked me wasn’t the fact that my question didn’t get a reply from anyone on Twitter, but the fact that I received a tweet reply from @SpotifySG.

END_OF_DOCUMENT_TOKEN_TO_BE_REPLACED

Do it now. It takes less than a minute.

Google Reader ranks high on my list of Apps I use the most often. I use an iOS and OS X app called Reeder that pulls all my Google Reader feeds and consolidates them into a really sleek user experience and interface. Google’s unfortunate decision to kill the Google Reader months ago, with the date it finally goes offline set on 1st July 2013, has definitely lead to me scrambling to find an alternative before the actual kill date.

I actually discovered a similar service, Feedly, that pretty much does everything Google Reader does. I managed to import all my feeds from Google Reader in one click and it really didn’t take much effort on my part at all. If you’re looking for a replacement for  Google Reader, I highly recommend using Feedly in the interim.

END_OF_DOCUMENT_TOKEN_TO_BE_REPLACED

It’s going to be raw.

The Internet has been flooded with iOS 7 related news ever since its announcement at Apple’s WWDC on June 10th. While I’ve been trying really hard to resist adding to the shitload of iOS 7 related noise from self-declared designers giving their “expert” iOS 7 reviews, I’m unable to hold back any longer so here’s my two cents worth.

Let’s begin with a bit of a background. My very first Apple product was a MacBook Pro back in 2009. I’d never really heard of Apple before that and always thought that Apple products were bought by people who had the extra money to spare and nothing else better to do. Boy has that changed. That clunky machine is still going strong today and is still what I use everyday.

I’ve not looked back since and have added to my collection two iPhones and a classic iPod. That’s pretty much how far I go back with Apple. So before you start shitting on how I’m just another Apple fanboy, do understand that I embrace technology and seek whatever pleases me the most.

Now back to my thoughts on iOS 7. I really hate to say this, but it peeves me that every other Tom, Dick and Harry is ranting on and on about how hideous and broken iOS7 is. Do they really mean what they say, or are they simply in it for the traffic and fame?

Don’t misunderstand me. The people I have issues with aren’t those who painstakingly take time and effort to render their own improved versions of Apple’s iOS 7. I don’t have issues with them because they are the ones who actually are trying to make a difference by influencing Apple’s direction for iOS 7 for the better. These people are the ones who’ve realised that they can change and influence things that happen around them and we have to thank them for it.

“When you grow up you, tend to get told that the world is the way it is and your life is just to live your life inside the world, try not to bash into the walls too much, try to have a nice family, have fun, save a little money. That’s a very limited life. Life can be much broader, once you discover one simple fact, and that is that everything around you that you call life was made up by people that were no smarter than you. And you can change it, you can influence it, you can build your own things that other people can use. Once you learn that, you’ll never be the same again.”

The truth is, I don’t care.

Instead, what really pisses the shit out of me is how these people are constantly getting their bullshit published on recognised tech blogs all over the web. Of which some I’ve already made a mental note to unsubscribe from.

In my opinion, the iOS 7 beta is what it is. Be nice about it. It’s an OS truly in it’s beta stage that has been rolled out to developers to test for bugs and software compatibility. It’s not meant to take over the running of your iPhone from the current OS, at least not for now.

END_OF_DOCUMENT_TOKEN_TO_BE_REPLACED

I think this just made my day.

Choosing a domain name can be really daunting nowadays as many of the valuable .com domains have already been snapped up. By valuable I mean domains that make sense or matter. For example, a company like Facebook would want a domain name that represents their brand and hence have the domain name facebook.com, and people like you and me who want a presence online, place value in domains that contain our names, something like johnsmith.com.

Naturally, when I began searching for a personal domain name 2 years ago, all the “Daniel Lim” related .com domains had already been snapped up and I eventually had to settle on the domain “thedaniellim.com”.

What I didn’t realise at that time was how much my subconscious mind hated that domain. Also, being new to the whole domain buying game, I had no idea that words like “the”, “a” and “by” added no value to a domain name. In fact, domains that contained these filler words were considered less valuable. Take for example, daniellim.com looks, sounds and feels much better than thedaniellim.com.

I hated that my previous domain contained the word “the”. As the “The” made it sound cheesy and also made me sound really narcissistic.

So when I recently started on round 2 of my personal domain name hunt, I made sure that I had a list of important traits I wanted my dream domain to have and not have.

Keeping these rules in mind, I then spent a period of two weeks brainstorming for a possible domain name that could represent my presence on the Internet. It was only after two weeks of patient brainstorming, searching and seeking advice from professionals out there that I decided on this domain name, danl.im.

I’m really happy to say that I love my current personal domain name, danl.im. I love how it looks. I love how it accurately represents me. I love that it only has 6 letters. And I love how every letter of the domain has been put to good use because it doesn’t have a .com. My only concern is that it’s a little difficult to type on the keyboard, but I figured that the pros heavily outweighed the cons so I bought it anyway. The rest is history.

END_OF_DOCUMENT_TOKEN_TO_BE_REPLACED

I’m a real sucker for apps and have actually been collecting them ever since getting my first iPhone 2 years ago. I’ve since downloaded 261 apps, of which 116 remain on my iPhone. The problem is, I’ve always had a difficulty managing and organizing the apps on my phone. As much as I’m a fan of Apple products, I feel that iOS’ limited app organizing ability is actually one of its biggest limitations.

I’ve also realised that on top of collecting apps, the phone has gradually been taking away more and more of my time over the years. I constantly find myself scrolling through Facebook, Instagram and Twitter mindlessly, reading updates over and over again and opening data heavy apps like YouTube in the subway for entertainment, only to be really frustrated because of the non-existent data network in Singapore.

I began searching on the Internet for the best and most productive way to organize apps, but somehow most of what was available didn’t make much sense to me, probably because everyone prefers organizing his/her phone in a different way.

It was then that I decided to conduct a little experiment.

I also tried my best to follow the concepts of usage-based, relatedness-based and usability-based app arrangement (read more about it below). I’m really happy with what I have so far, hopefully it’ll be a start to helping me cut down the amount of time spent on my phone, or at least the amount of time spent mindlessly scrolling through social media apps.

Here are some screenshots of the current state of my phone: 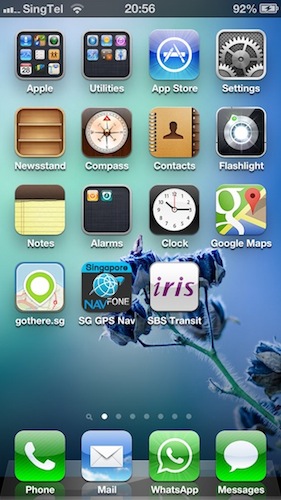 The screen to the left of my “Home” screen

Here’s where all my utility apps are. If you’re familiar with iOS, I use the screen to the right of this as my “Home” screen, so this “Utility” screen is easily accessible with one swipe to the left. 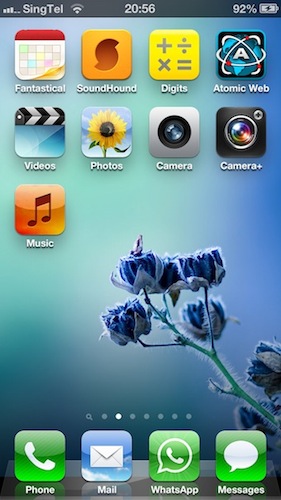 I use these apps the most, or at least want them to be the apps I use the most.